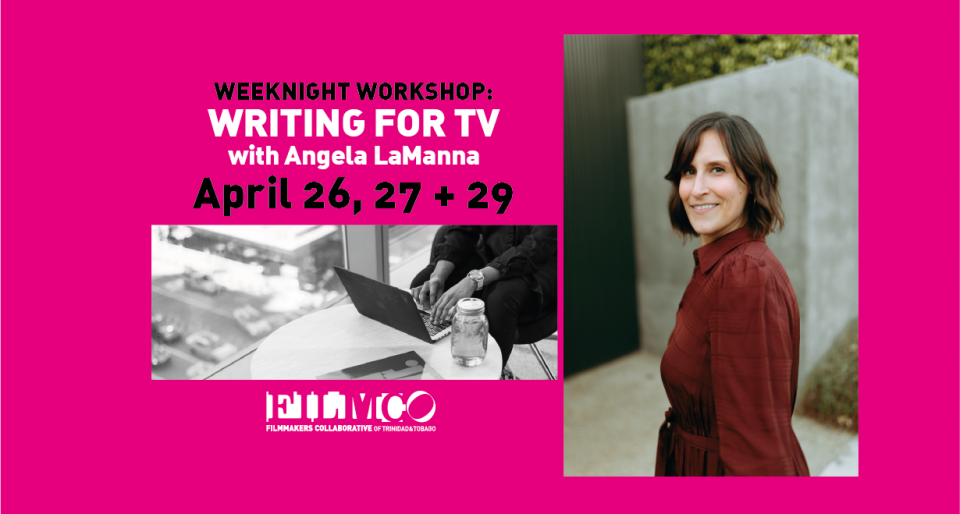 Writing for television? Well that’s just like writing for film once you know three-act structure… Oh let us stop you right there friend. FILMCO is excited to present this foundational workshop on writing for television with Angela LaManna, whose credits include Netflix’s “The Haunting of Bly Manor”, Marvel’s “The Punisher”, and Syfy’s “Channel Zero” among other series.

Writing your TV pilot, and any episodic work, takes knowing not only three-act structure but how this structure is applied differently in an episodic format, among other things. How do you apply three-act structure to a season of a series, to each episode in that season and to each sequence in that episode, just to name a few? What techniques can you use in your pilot that may help you get your work noticed? And how do you get your script seen as a Caribbean filmmaker? These are just a few of the important topics that will be covered by Angela LaManna in our April Weeknight Workshop. This workshop will take place over three (3) days for three (3) sessions. Full details can be found below.

Session 1: How to write something that will get you noticed

Building story arcs over several seasons- for both longer-form and shorter-form productions
Pitching as the writer
The showrunner- their job, roles and responsibilities
What’s presently going on in the world of television

Session 3: How to connect

FILMCO members/students can receive a 20% discount on the ticket price. To receive a discount code, please email admin@filmco.org.

Participants can also pay for the workshop via online bank transfer. Email us at admin@filmco.org for information.

Participants should have a basic understanding of scriptwriting but this is not mandatory.

About the Facilitator: Angela LaManna

Angela LaManna grew up in Syracuse, New York. She was an English major at The University of Texas at Austin, where she took courses in creative writing for fiction, poetry and the screen. She worked in the nonprofit sector as well as a story producer for reality TV before she landed her first scripted television gig as the showrunner’s assistant on “Hannibal”. She sold her first script that same year to A&E. Her credits include “Channel Zero”, Marvel’s “The Punisher”, “Behind Her Eyes” and “The Haunting of Bly Manor”. Angela also teaches screenwriting for the Sundance Institute’s Co//ab program.