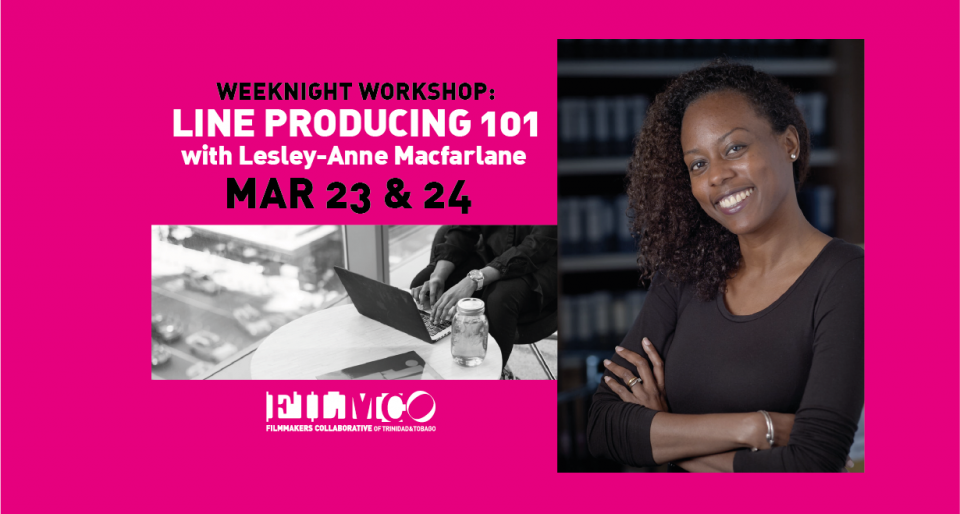 Producer. Executive producer. Co-producer. Associate producer. The list of producers on a project can go on and on. But what about line producers? What exactly is their role and what are their responsibilities off and on set?

According to ScreenSkills, the industry-led UK skills body for the screen industries, line producers “… are at the heart of a production, hiring the crew, allocating the money and making sure the filming is done safely, creatively, on budget and on time. They are typically the most senior member of the production team, second only to the producers.”

FILMCO is pleased to present this essential workshop on line producing with Trinidadian producer Lesley-Anne Macfarlane. In this two-day, two-session online workshop, Macfarlane will give participants a solid overview of the job of line producing.

Topics to be covered will include:

FILMCO members/students can receive a 20% discount on the ticket price. To receive a discount code, please email admin@filmco.org.

Participants can also pay for the workshop via online bank transfer. Email us at admin@filmco.org for information.

Participants should have a basic understanding of film producing.

About the Facilitator: Lesley-Anne Macfarlane

Lesley-Anne Macfarlane is a producer with a range of experience from commercials to independent film, working across several countries. Her broadcast credits include line producer on feature films “Play the Devil” and “HERO Inspired by the Extraordinary Life & Times of Mr. Ulric Cross”, which have both opened for the Trinidad and Tobago Film Festival. She is currently producing the short film “Immune” and her first feature film.

With a BA in Visual Art and an MA in Culture, Policy and Management, Lesley-Anne has been involved in several NGOs and arts organisations and is especially interested in projects that can make a positive impact.

In 2017, with a group of local filmmakers, Macfarlane co-founded the Filmmakers Collaborative of Trinidad and Tobago (FILMCO), a social enterprise dedicated to creating a sustainable ecosystem for film and television producers and directors in Trinidad & Tobago and the wider Caribbean.