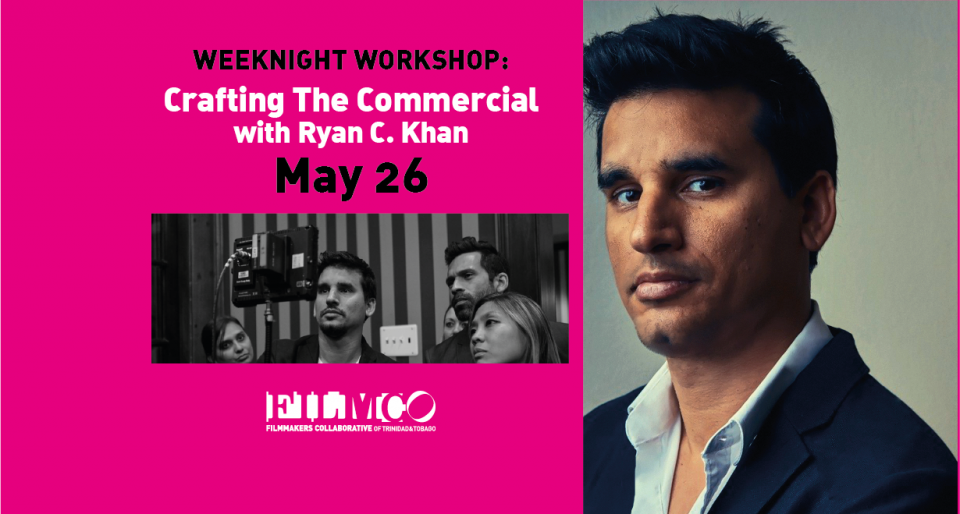 The commercial world: an unfamiliar universe for many emerging filmmakers. But here in Trinidad & Tobago as elsewhere in the Caribbean, commercials are a main avenue of production. How does one break into this world? Do you need a specific skill set? And what is it like working in an environment where projects are short-term but demand focus, knowledge and ingenuity?

FILMCO is pleased to present this foundational workshop on crafting commercials with ADDY Award-winning filmmaker Ryan C. Khan. In this single-session Weeknight Workshop offering, Khan will take participants through the commercial process from the perspective of the director sharing his experiences as a commercial director/editor and producer. Topics will include the following:

FILMCO members/students (with a valid student ID card) can receive a 20% discount on the ticket price. To receive a discount code, please email admin@filmco.org.

Participants should have a basic understanding of filmmaking specifically directing.

About the Facilitator: Ryan C. Khan

A filmmaker hailing from the twin-island republic of Trinidad & Tobago, Ryan C. Khan prides himself on being one of the many filmmakers emerging from the Caribbean, a new frontier for storytelling. His first accolade was back in 2012 when he won the Tribeca/Worldview pitch competition at the trinidad+tobago film festival in 2012. Then in 2013, he participated in the prestigious Berlinale Film Festival Talent Campus and the trinidad+tobago film festival Filmmakers Immersion Programme. A year later, his third short film “How Many Times?” was accepted into the Cannes Film Festival Short Film Corner 2014.

After this he began working in the advertising industry, directing TV commercials for major brands within the region, such as his debut commercial direction for the McCann Erickson Advertising Group, B-mobile ‘Giraffe’ – which won 6 Gold Addy’s at the Caribbean Advertising Federation Awards 2016 and the Mosaic Award for diversity at the 4th District American Advertising Awards 2016. Currently, Ryan directs, produces and edits his own projects under Ryan C. Khan Films while continuing to work within the region, producing projects for major brands.