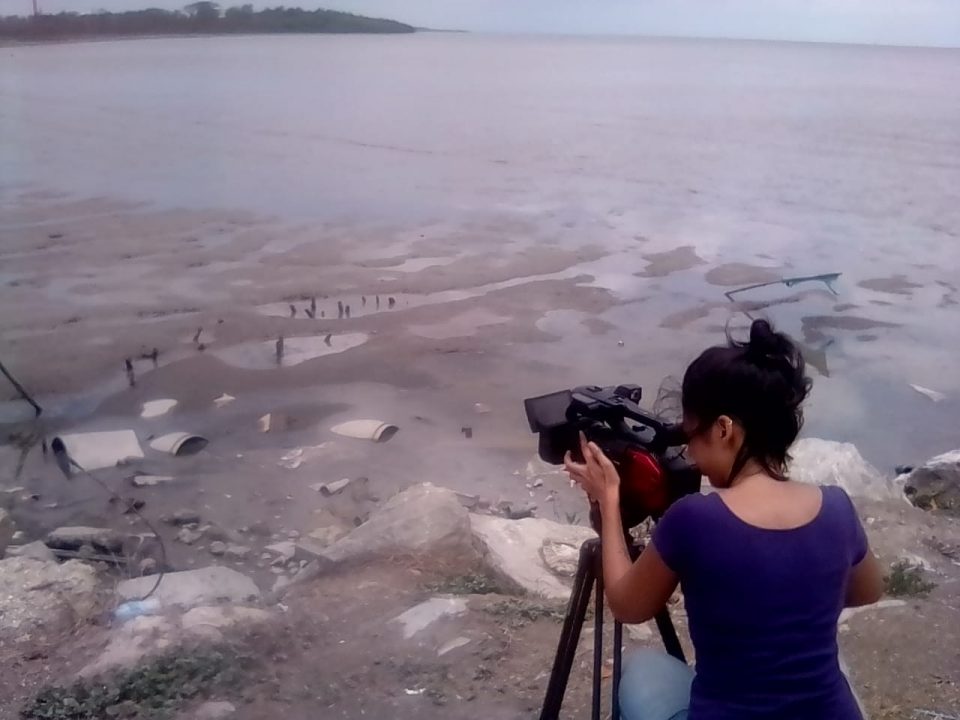 FILMCO: What initially drew you to filmmaking?
RCS: Growing up, filmmaking never crossed my mind as a career option. I actually wasn’t sure about what I wanted to do as a teenager, and only figured it out in adulthood by continuing to follow my interests, and both taking and making opportunities until it all came together in a moment of recognition. But I’ll go back a little bit to childhood and adolescence first.

It became impressed upon me that in order to make a living from art, you needed to be exceptional, otherwise you’d end up being a “struggling artist”. I believe that this idea was reinforced in part by the educational institution I attended, where the “smart” students did science, and in fact, you were not allowed to choose science subjects if you didn’t excel in them. I think that most teenagers will give the knee-jerk response that they want to be a doctor, or a lawyer, or an engineer, without fully understanding what those professions entail and I believe that this reflects what our society upholds as more inherently valuable. And so, as a child, I followed in the footsteps of my older brother who is an engineer. I chose Math, Further Math and Physics for ‘A’ Levels, and as far as I knew, I was on my way to becoming an engineer as well, which is a lovely and rewarding profession if that is where your interest lies. I also knew that it was easier to score full marks in math and science because the grading rubrics relied on ‘absolute truths’, whereas grading in the humanities felt entirely too subjective and therefore unreliable for me at that time.

I ended up earning a national scholarship in the math group, and that in combination with a full-tuition scholarship allowed me to pursue my tertiary studies in the United States. I attended a liberal arts university, where it was mandatory to take courses in the humanities. I discovered that I loved art and philosophy and languages, and almost became a Spanish and Asian Studies double major, but I quickly changed my mind after going to study abroad in Chile. There, I had met several people who spoke at least two languages and I talked myself out of it, believing I would never survive at home in Trinidad with those majors. (Of course, I think that this is where we need mentors, people who are well-equipped and interested and invested in guiding young people through their career development.) So, I fell back on science, majoring in Environmental Science, but the hard rock branch of it. I actually felt miserable during my thesis, and in contrast, noted the enthusiasm of my professors.

It finally registered that there are people who love all sorts of things, even rocks, and that you really need to love something to be able to turn up every day to work and feel fulfilled. I felt caged in the lab with the microscope and was much more curious about the human side of things, how humans interacted with the environment. I began to consider other options while also finishing off my degree, and I asked myself: if I could do it all over again, what would I do? The answer was: something that combined art and philosophy and was very practical in nature but I still wasn’t sure what that could be. I enrolled myself in the American Anthropological Association’s conference which was being held in New Orleans and went with a friend who was also considering Anthropology. There, I found myself intrigued by all the visual and cultural anthropology sessions. The very last session I attended was the screening of a documentary film, “Brother Towns/ Pueblos Hermanos”, and that’s when it hit me, that this was what I wanted to do. I applied for Masters programs in documentary film and cross-cultural communication, to begin to formalize my interests into a profession.

FILMCO: Where does your inspiration come from?
RCS: I’m definitely more of a non-fiction storyteller, drawing inspiration from true stories, even though fiction storytellers also do this, but in different ways. My mission is to share stories that build bridges, that cross-cultural divides and explore our humanity and what it means to be human. I love underdog stories and everyday heroes – they can inspire us to take ownership and responsibility for our actions in making this world a little better, a little brighter and a little more hospitable for ourselves and each other.

FILMCO: How did you find your unique voice as a director?
RCS: I think that the work of a filmmaker is in constant evolution, however, I love adventure, exploring new ideas, and exploring what it means to be human, and I think the essence of my work mirrors that. I aim to present different perspectives, especially voices from marginalized groups, overturn stereotypes, and push for more understanding, compassion and justice.

FILMCO: What roadblocks did you face when starting out?
RCS: I was lucky that I had an exceptional mentor early on, Emilie Upczak, who I met shortly after returning to Trinidad. I think she understood my sensibilities as a filmmaker and the possibilities for my work. Emilie took me on board as an associate producer and eventually a co-producer on her feature film, Moving Parts, and her feedback has helped me to keep me focused towards staying true to developing my work in my style. I have developed friendships with other filmmakers as well and get feedback from them at various stages, which helps a lot when you get stuck creatively or get too close to your own work that you are no longer able to recognize things that are not working. I think there needs to be more space for varied forms of expression within the art form, and that there needs to be an understanding of the limits of our own subjectivity, where work can be valued on its merit and not merely from the limits of a single individual’s aesthetic sensibility.

FILMCO: Where does an idea for a movie usually begin for you?
RCS: A movie can begin for me in different ways. Sometimes it comes about as exploring an issue, or through coming across an interesting character, or it may even be a single image that spurs a question, an environment, or a scenario I’d like to explore.

FILMCO: How did the idea for Nearest Neighbours develop/ come about?
RCS: “Nearest Neighbours” came about as an exploration of the experience of Venezuelan refugees and asylum-seekers, on learning of their vulnerabilities due to their precarious legal status. I also remember being floored by the responses of the public to the boats that overturned en route to Trinidad. The loudest and most overwhelming voices were xenophobic, hateful and without compassion.

FILMCO: What change do you hope to affect with this film?
RCS: I hope to be able to contribute by presenting a platform where the voices of refugees and asylum-seekers can be heard. I think it’s important that we bear witness to these experiences and keep them visible, otherwise they might disappear quietly and without much resolution.

FILMCO: Looking back, in what ways has your work has developed from “Riding Bull Cart” to “Nearest Neighbours”?
RCS: Each work is approached differently. I have edited all of my documentary work, but have also collaborated with other filmmakers. “Nearest Neighbours” was a deeply personal experience for me because I operated the camera, conducted interviews and edited the film, with a lot of feedback along the way of course, particularly from my producers and other filmmakers that I admire and have developed friendships with. Although I deeply value collaboration, I wanted to challenge myself to take up the camera again, and to allow myself and the camera to respond without an intermediary. I feel very connected to the piece, and every choice also represents my relationship to the subject matter and to the characters.

FILMCO: What are some local/ regional movies that have inspired you (and why)?
RCS: I was really moved by Mariel Brown’s documentary film, “Unfinished Sentences”. I loved its poeticism and the risks it took all round, even its form as a first-person documentary film, which is not an easy style to pull off. I think it was a brave and vulnerable work.

FILMCO: Who are some local/ regional filmmakers/ creatives you would like to work with?
RCS: I have been fortunate to work with many creatives that I admire, including Emilie Upczak, Dominic Koo, Oliver Milne, Shari Petti, Arnaldo James, Ivan Spee, Edward Inglefield as well as dedicated crew who have each played a part in making every project come to fruition, from the zero budget to the micro-budget. With regards to documentary film which is my preferred style of filmmaking, this is a very intimate process for me. It’s not such an easy question to answer because you can’t go on aesthetics alone. You end up spending a lot of time with your creative partners during the course of a documentary so there is always a significant amount of trust, synergy as well as open communication, active listening, adaptability and of course, a shared vision as well as complementary skills.

FILMCO: What would you say is the best advice you’ve been given on filmmaking that you would give to others?
RCS: Embrace your own voice and perspective, and understand your positionality and how that shapes the story you’re trying to tell.

FILMCO: What’s next for Nearest Neighbours and for you?
RCS: “Nearest Neighbours” will begin its festival run and I’d love to be able to do more community screenings, working with communities to create forums for discussion using the film to help foster dialogue. I’m working on developing new projects for 2020 and continuing to find or make ways to earn a living doing what I love.