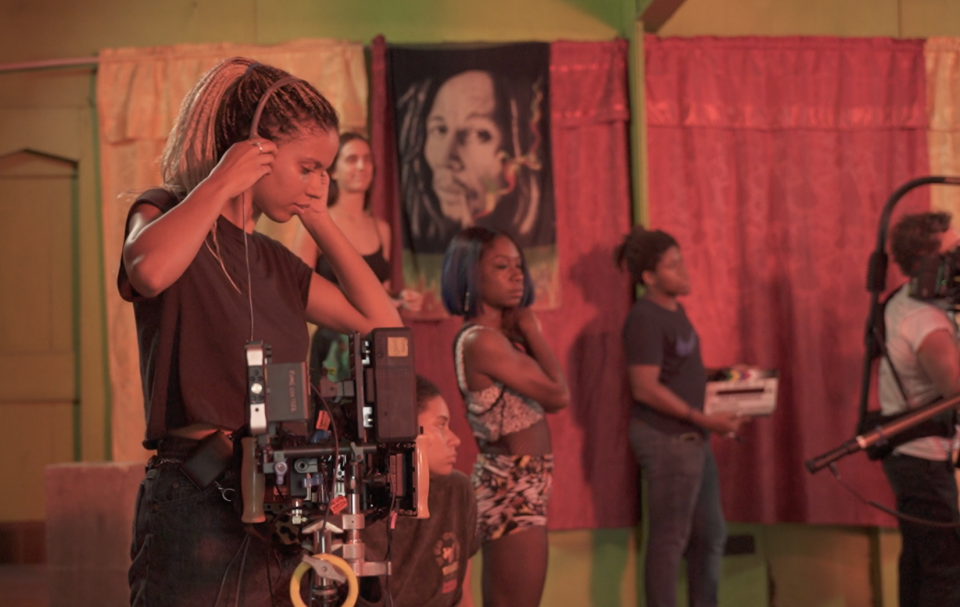 This month we feature an interview with FILMCO member Maya Cozier, who is a film and music video director from Trinidad and Tobago. Her short films have been screened at festivals internationally, winning awards at Curacao International Film festival and the trinidad+tobago film festival. Her most recent short film, She Paradise, premiered at BAM (Brooklyn Academy of Music) in March 2019. Maya Cozier won the Take One grant to turn She Paradise into a feature-length film, which will have its world premiere in 2020.

FILMCO: What initially drew you to filmmaking?
MC: As a teenager, I was a dancer and an artist. I always had an interest in incorporating moving images and video into my work. I had a little video cam that I would use to film dancers as we performed at different gigs. I remember editing them together on iMovie and uploading them to Youtube. When I enrolled in college, I knew I wanted to go to art school but wasn’t quite sure what concentration I wanted to pursue. After making my first short film, I fell in love with the medium as a way to tell stories and document my experiences.

FILMCO: Where does your inspiration come from?
MC: My inspiration comes from the people around me and my lived experiences. I think what we see and experience firsthand is valuable. I’m inspired by the women in my life and telling stories that prominently feature women making decisions, being active and at the forefront of the narrative.

FILMCO: How did you find your unique voice as a director?
MC: I think for some time, in the beginning, I felt that my perspective wasn’t valuable. When narratives are dominated by white men in front and behind the camera, you can feel like you’re sitting somewhere you don’t belong. That began to change as I started watching more films outside of the mainstream. I started seeing films that felt like stories I could tell and I started to feel more comfortable in my own voice.

FILMCO: What roadblocks did you face when starting out?
MC: I think financing your first film. Actually that never ends. Indie filmmakers are always trying to finance their films and that can be one of the most discouraging aspects of filmmaking. When I returned home from college, I set out to direct my first feature right away. It took a few years to get it off the ground.

FILMCO: Where does an idea for a movie usually begin for you?
MC: I am a visual person by nature so ideas for films usually begin with the visual. The first thing I know is what I want the film to look and feel like and then I begin to create the narrative structure around that.

FILMCO: How did the idea for She Paradise develop/ come about?
MC: When I returned home, I simply knew I wanted to explore sisterhood and tap into some of my experiences as a teenager living in Trinidad. I then started interviewing dancers and the story for the film became clearer from those interviews. I was lucky enough to get women to open up to me about their personal stories. Those interviews helped affirm that there was an important story to tell.

FILMCO: Looking back, in which ways would you say your work has developed from Short Drop to She Paradise?
MC: Short Drop was made when I was living away as a student, so at the time I was a little alienated from Trinidad. Not being on the ground and interacting with an environment every day changes the process. I think one of the best things about working on She Paradise is that I was physically in Trinidad while researching and writing the script. Being here allowed me to see and experience everyday things which added to the world of the story whether it be a location or a chance encounter that makes you see something a little differently.

FILMCO: Which are some local/ regional movies that have inspired you?
MC: Dancehall Queen was a huge inspiration. I made wardrobe and art look at that film. It has a visual style and flavour that resonates with me. ‘Rain’ was inspiring as an example of a coming of age film set in the Caribbean with a strong female lead.

FILMCO: Who are some local/ regional filmmakers/ creatives you would like to work with?
MC: I’d be curious to get some insight into the process of directors like Maria Govan and Storm Saulter. They’ve really been an inspiration in showing that we can make great narrative cinema.

FILMCO: What would you say is the best advice you’ve been given on filmmaking that you would give to others?
MC: More coverage!

FILMCO: What’s next for She Paradise and for you?
MC: She Paradise will have its world premiere this year. I have to keep the details hush for now, but you should follow our Instagram page to stay updated.