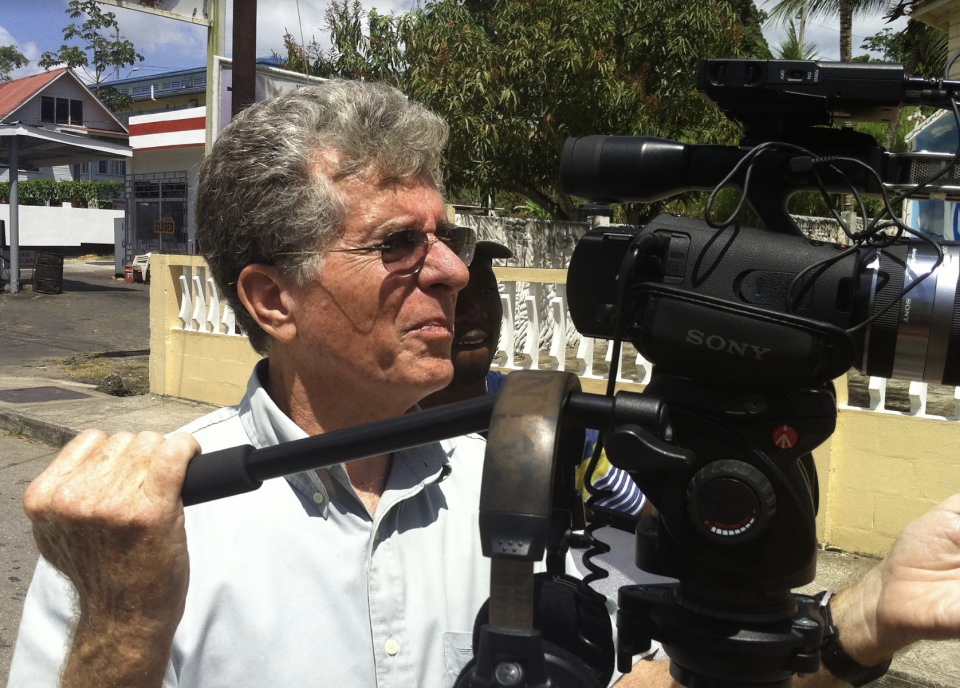 Christopher Laird is a prolific Trinidadian filmmaker who, over the past 40 years, has produced over 300 documentaries, dramas and other video productions with Banyan Ltd, and garnered a score of national, regional and international awards. He has been a teacher, published the arts journal, Kairi, and ran a theatre in Port of Spain during the 1970s. Laird has also overseen the establishment of what is arguably the world’s largest collection of Caribbean culture on video in the Caribbean Film and Video Archive. In 2003 he founded, with Errol Fabien, the region’s first all Caribbean free to air television station, Gayelle. In 2009 he was awarded an honorary doctorate by the University of the West Indies.

FILMCO interviewed Christoper Laird ahead of the ttt screenings of his films, ‘Paradise Lost’ (9th January) and ‘No Bois Man No Fraid’ (February), to get some greater insight into the veteran filmmaker and his process.

FILMCO: How did you get into filmmaking?
CL: I have always wanted to be a filmmaker. It begins practically with a film course while at university in the UK in the late 60s. That course worked in film (the video cassette had not yet been invented). My first opportunity to use video came in1970 with the Sony Portapack ( a ½ inch black and white reel to reel machine) while working on my post graduate certificate of education. We used it in schools to record teachers in the classroom. I worked in that format again when I returned to Trinidad in 1971. In 1974 after a television programme making course run by UNESCO, UWI and TTT we started making programmes for transmission by TTT and by 1976 we, Banyan, established our own production facility using U-Matic ¾ inch cassettes. Some ten years later new formats such as the Betacam and later the digital video cassette and the direct to digital files which is still in use today.

FILMCO: Where does your inspiration come from?
CL: This is difficult to answer. I guess it is rooted in our commitment to the production of television programmes about Caribbean people. The aim: To enable Caribbean people to see themselves and the world through their own eyes in a media environment in which 98% of the television came from the US.

FILMCO: Which was your favourite film as a child and why?
CL: I can’t say I had any favourite movies as a child. Just going to the cinema was a weekly treat. Choices were largely limited to Hollywood films. I used to like going to see European films at the Roxy. There I saw Fellini’s 81/2 which was an unusual opportunity to see non Hollywood films and opened my eyes to other ways of filmmaking.

FILMCO: Why is documentary filmmaking important to you personally?
CL: Over the past 45 years I have made literally hundreds of television programmes, dramas and documentaries with Banyan. But I find I have made and continue to make more documentaries, especially as drama is costly and few people are willing or able to produce drama consistently. My passion is to record and preserve our culture. “Paradise Lost” is an example. Without that film, memory of that landmark [carnival] band would be lost to oblivion despite the work of George Tang who filmed the band in 1976 before portable video was used commercially. Similarly, ‘No Bois Man No Fraid‘ allows an audience to enter a world they know little about, meet the legends of stickfighting and follow the journey of two young martial artists as they discover this indigenous art form. Some of these masters of the art have since passed, only underlining the importance of documentaries in building the Caribbean film/ video canon.

FILMCO: What have you found is the best creative process for making a documentary film? Do you start with an idea of the narrative, or do you discover the narrative as you’re filming?
CL: We at Banyan have always chosen to treat our documentaries as exercises in discovery. In almost all cases we may start with an outline script but that would develop and change as we filmed and discovered more about the subject. Most of the time I would discover what the film was really about while editing.

FILMCO: How did you come across the story of ‘Paradise Lost’?
CL: When carnival aficionado, Ray Funk, launched his book on the Stephen Lee Heung bands ,We Kinda People, at NALIS in 2014, he showed films of Lee Heung’s band shot by George Tang. George’s film of “Paradise Lost” on stage stunned us all, we never knew this footage existed. It was silent, no audio. Masman Peter Minshall – who was in the audience – was invited to give commentary of the film as it played. I was so impressed by the historical importance of George’s marvellous footage and Peter’s commentary that I was determined to make a proper film that would serve to give future generations an appreciation of this revolutionary mas.

FILMCO: What was it like working with legendary masman, Peter Minshall, can you share some highlights/ memories from that experience?
CL: Working with Minshall was a very special experience. Though I had filmed practically all of his bands on the street and on stage over the years and have filmed many interviews with him, I had never worked with him on a project.

Filming Minshall’s commentary and interview was done over two sessions. He was so supportive and engaged in the making of the film. He was at his emotional, dramatic and eloquent storytelling best. I worked closely with him as I didn’t want to do this film unless he was happy with what we were doing and, in some cases, we solved some of the problems together. His input was perceptive and imaginative, worthy of the genius he is.

One particularly difficult part that bothered us was the transition near the end with the story of Pat Bishop crying to the final shot  “One artist to another…” We tried a number of possible solutions to not break the emotion and eventually settled on the crossfade in the completed film.

FILMCO: Did you get commissioned to make your documentaries or were you responsible for finding the funding for the documentaries you worked on?
CL: Many of documentaries were commissioned but my last seven films were made with no budget as I filmed and edited it all myself and because they satisfied two criteria:
1. I have to be passionate about the subject and convinced it had to be made.
2. I had to be convinced that I was the best person to make that film.

FILMCO: Looking back, what was the experience of running a theatre like, and did it have any impact/ effect on your filmmaking?
CL: In 1973 we were running a theatre, Kairi House, in Pelham Street, Belmont. The drama group behind it, ISWE, was founded by Rawle Gibbons. We didn’t have the means or access to make films but in 1974 we were selected to take part in a course to stimulate local television production run by UNESCO, UWI and Trinidad and Tobago Television (TTT). From that came the TTT workshop, which began a series called Banyan on TTT. This was so popular our group became known as Banyan. In 1976, as part of TTT chairman, Jimmy Bain’s mission to weed out criticism of the government in the state media and, according to Mr Bain, ‘communists’, Banyan was banned along with journalists and TV personalities such as Wilbert Holder and Raoul Pantin.

This did not affect the Family Planning Association seeing our work and commissioned us to produce the anglophone Caribbean’s first television soap opera, Who The C.A.P. Fits. The rest is history.

FILMCO: Which are some local/ regional movies that you find inspiring and why?
CL: Naturally I would think that the work of Banyan and myself and Bruce Paddington’s documentaries—like ‘Forward Ever’—are important films. It would take too long to list the many great films made regionally from Cuba, Puerto Rico, Martinique and the work of filmmakers such as Maria Govan and France-Anne Solomon.

FILMCO: How has filmmaking changed over the course of your career and what are your thoughts on the recent movies/ documentaries made locally and regionally?
CL: Filmmaking has changed tremendously over the past 45 years. Technically ,the ability to make movies of international quality for less cost has placed cameras into many hands (when we started we were among a handful with video facilities). Now everyone has access to excellent video cameras via their phones. The advent of digital video, shooting and editing along with the work of the film course at UWI and other institutions as well as the encouraging influence of the trinidad+tobago film festival has allowed young filmmakers to make films of reasonable international quality.

The main drawback for local films is the lack or even absence of good screenplays. The screenplay can make or break a movie. Many people believe that writing a screenplay is all they need even though they are imitative (trying to follow Hollywood formulas) and lack the qualities of a good screenplay. They are like bad theatre scripts, believing that a script full of words is all one needs. It takes a great deal of imagination and thought to tell stories without words. This is a major problem due to lack of training and experience. With many more years of experience maybe it will improve.

FILMCO: What is the best advice you’ve been given on filmmaking that you would give to others and in particular to aspiring documentary filmmakers?
CL: Try to work with passion and subjects that interest you rather than going for the sensation. Training and experience are vital. Start your experience on short form films before long form and feature length. Many local documentary films are filmicly illiterate and have little respect for the subjects. If your film would not be missed , or add to the knowledge of the world if never made, then it should never be made.

From my point of view, any documentary maker who starts and ends with the same script, shows little interest in the subject, has not done the work as documentarist but aims at showing off the filmmaker. Documentaries should be voyages of discovery both for the filmmaker and the audience.