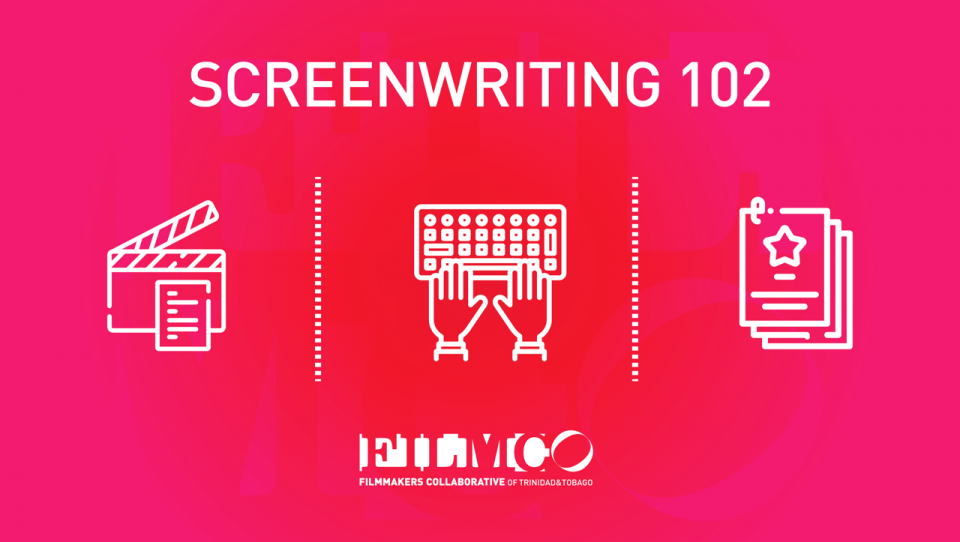 Trinbagonian, award-winning screenwriter, Teneille Newallo, reminds us that writing a successful screenplay is almost a science. Most of the stories that succeed are the ones that engage an audience, and they tend to follow a similar structure. Ingenuity, creativity and a good understanding of the human condition all play a large part in telling a compelling story, but the professional execution of that story is what will get the attention of industry professionals and audiences.

During the Screenwriting 101 workshops, Teneille focused on formatting and structuring the first 10 pages of a screenplay, preparing the writer for the task of writing a feature-length screenplay. The Screenwriting 102 six-week course will focus on the structure of the entire screenplay. Ranging from plot points, character arcs and ‘A’, ‘B’ and ‘C’ stories. It will demonstrate the strength in dividing your story into a 4-act structure as opposed to 3; and dives into creating compelling characters, developing their journeys and creating the world in which they live.

This workshop is designed for participants who already have a basic understanding of screenplay formatting. Each individual should have a completed screenplay, a detailed treatment or at least the first ten pages of their feature, written. Throughout the 6-week course, students will learn the foundation of feature-length storytelling and will experience how to apply the lessons to their own projects. They will be encouraged to take what they’ve learned in each class and apply it to their own screenplay before returning to class the following week.

By the end of the workshop, participants should have a stronger grasp on the structure of a feature-length screenplay, the importance of applying these details to their own stories; and should either have a completed screenplay or have a stronger re-write of their previous screenplay.

Teneille Newallo is an award-winning screenwriter, actress, filmmaker, and author. ‘The Cutlass’, which made the shortlist for the Sundance Screenwriters Lab 2012, is Teneille’s debut feature-length film as a screenwriter, producer, and casting director. It won multiple awards including both People’s Choice and Best Feature Film at Trinidad & Tobago Film Festival, 2016 and Best Actress and Best Cinematography at Palm Bay Caribe Film Festival 2018. ‘The Cutlass’ also had a successful 6 week run in Caribbean theaters and is now available on multiple platforms in the US, Canada, UK, Scandinavia, and China.

Her screenplay, ‘Soucouyant’, also made the shortlist for the Sundance Screenwriters Lab in 2015; now a pilot script for a television series, it was chosen to be pitched at Toronto International Film Festival through the Caribbean Tales Incubator Program 2019, was a Top 5 finalist at the New Orleans Film Festival 2019 and was the winner of Best TV Pilot Script at Oaxaca Film Festival 2019. ‘Mangroves’, shot in 2018 as the proof of concept for the series, was her debut short film as a director and won the people’s choice for Best Short Film at the Trinidad & Tobago film festival in 2018, beating out over 80 other films. Teneille is currently fundraising for the feature film, ‘La Diablesse’ which she wrote, and is ‘shopping around’ other feature projects, all written by her.

Our Screenwriting 101 workshop series was facilitated using the online video conferencing platform, Zoom and it was such an invaluable experience for our attendees. With this in mind, we are offering the same online platform for all our Screenwriting 102 workshop sessions; so participants can attend from the comfort and safety of their homes!

You can also pay for the event via online bank transfer. Participants must sign up for the full course, and pay fees in advance of the first session. If you’re a student or FILMCO member, please email us at admin@filmco.org to receive a discount code.

Participants will get an overview of how to structure a feature-length screenplay which consists of the ‘setup’, ‘confrontation’ and ‘resolution’; and will get an introduction to the major turning points in a screenplay as well as the importance of protagonist character development and arc.

A detailed discussion on the first act of a feature-length screenplay. The focus will be on the major plot points and all essential elements necessary for creating a strong first act and hooking the reader. Topics of discussion include the tone, theme, world of the story, character introductions,protagonist complexity,etc.

By separating the second act into two, the most difficult part of the screenplay is broken down more simply to discuss obstacles, turning points (including the midpoint) and an introduction to the subplot.

Discussion on how to bring the story to completion, through the climax, where the audience feels fulfilled with the ‘pay off’.

What really is the A, B and C story in a screenplay? Are subplots the same as A,B and C stories? Participants will learn the specifics of this topic along with the importance of them.

Participants will take what they have learned throughout the course to apply it to their own stories that they’re working on. They will tell the class their story by answering specific questions supplied by the facilitator. These questions will be based on everything previously discussed and will provide them with the tools needed to complete their feature-length screenplay.

View Event Here Note: Participants must sign up for the full course, and pay fees prior to receiving the Zoom meeting link for the first session.