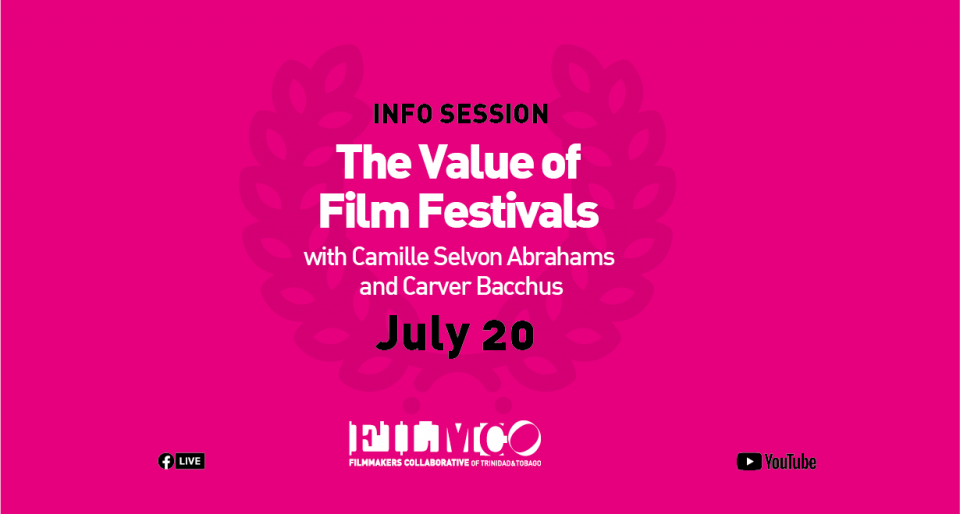 According to an article posted on the website Screen Daily, “Film festivals are a vital link in the chain of global film culture.” Raindance Film Festival also puts it well: “Any filmmaker, large or small, needs to raise awareness of their film. Large studios use large-budgeted public relations and marketing campaigns out of the financial reach of an independent filmmaker.” Awareness of your film; the chance to meet potential collaborators; securing distribution for your project, and deepening your knowledge through industry training are just some of the intangibles and tangibles alike that speak to the value of film festivals for independent filmmakers!

On Tuesday July 20th, we take this critical conversation online as Camille Selvon Abrahams and Carver Bacchus join us to discuss the value of film festivals. Bringing their many years of experience as founders of the Animae Caribe Animation Festival (Abrahams) and Green Screen Environmental Film Festival (Bacchus), Camille and Carver will expand on the importance of festivals which have become a main exhibition platform for filmmakers. They will also take viewers through the need-to-know’s for every filmmaker looking to submit in the future.

Camille Selvon Abrahams is the founding director of the NGO Animae Caribe Animation Festival which is presently celebrating its 20th year. She is the Programme Coordinator for Animation Studies at the University of Trinidad and Tobago where she spearheaded the creation of the Diploma in Animation Studies syllabus which has now evolved into a BFA in Digital Media Arts with specialisations in Animation, Game Design or Music Technology. She has a Bachelor of Arts in Media & Communication with a specialisation in Animation from Goldsmiths University of London. She recently served as Chairman of FilmTT under the Ministry of Trade and Industry.

Together with business partner Jason Lindsay, they created the first Caribbean outsourcing animation studio, Full Circle Animation Studio, in Trinidad, creating work for studios around the world. Their awards include the Royal Television Society Student Award 2000 – London, the Caribbean Tales Innovation in Animation in the Caribbean Award – Toronto, as well as the Trinidad and Tobago Film Festival Pioneer in Film Award in 2014. Camille was also shortlisted for the Commonwealth Foundation Award for Women in Business.

Carver has over fifteen years’ experience in the areas of communications and film production. He has worked as a communications consultant since 2008 and has created documentaries, animations, corporate videos and communications programmes for a wide range of clients including the Food and Agriculture Organization of the United Nations (FAO), the United Nations Development Programme, the German Embassy (Port of Spain), the University of the West Indies and the Institute of Marine Affairs (Trinidad and Tobago).  He is also a member of the NextGen Board, constituted by the Inter-American Development Bank (IADB), Trinidad and Tobago office in 2018. A first of its kind for the IADB, this group of cross-sectoral change-makers was assembled to take action on the sustainable development agenda in Trinidad and Tobago.