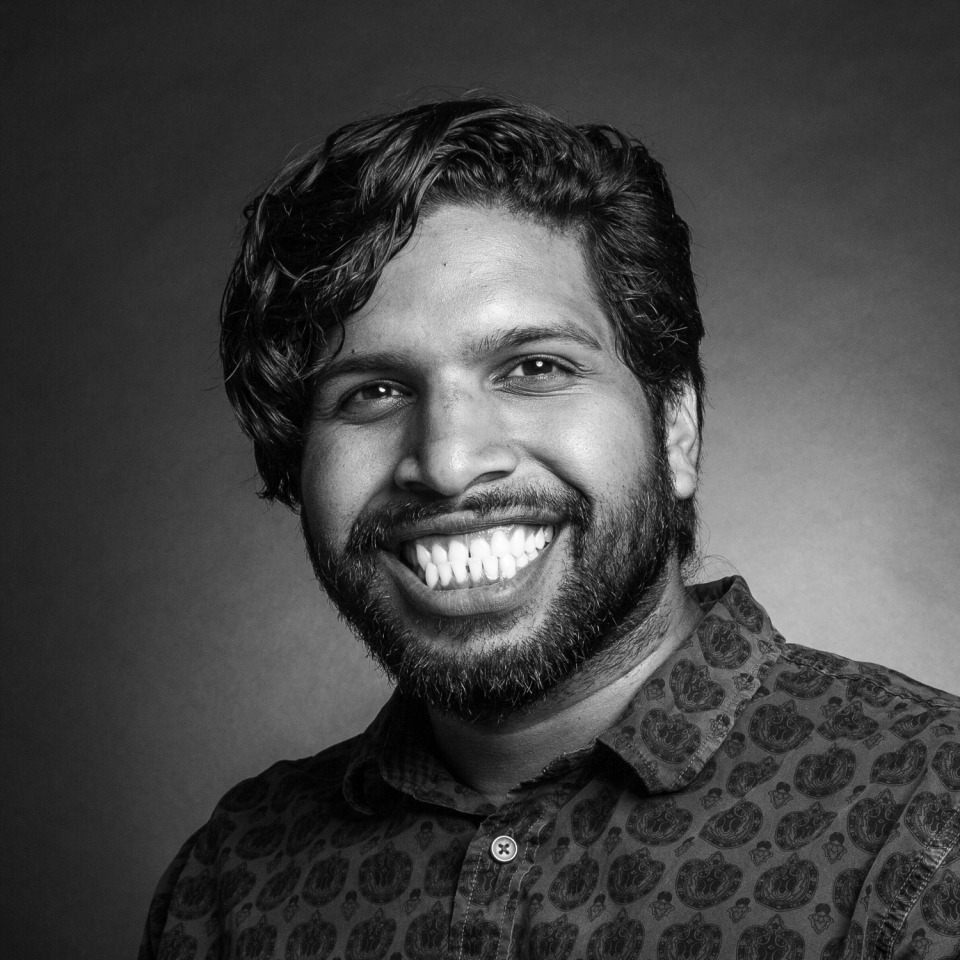 From a young age, Israel Ramjohn was given exposure to the arts by his mother who encouraged him to read, sew and explore other forms of expression. This sparked his interest in further pursuing the creative arts which would lead him to explore multiple disciplines. Now, he’s an experienced DoP, editor, multimedia designer, director and cook who has a love for all types of film genres, particularly sci-fi. This year he’s excited to showcase a new film that he both shot and edited.

FILMCO: What inspired you to delve into the creative arts?
IR: As a child, my mother would involve us in reading, sewing and other crafts and I had an obsession with plasticine, trying to model things I saw around me (mainly people and cars). I think that fascination carried on into my school years with creative writing at the primary level and visual arts at the secondary level where I would draw, paint and sculpt.

FILMCO: You shot your first short film for a competition at the age of 15. What was the competition and what was your experience as a first-time filmmaker?
IR: It was a contest put on by one of the local banks and the prize was a grant to upgrade your school’s Music Room. One of my classmates wrote a reflective poem and I shot the ‘film’ with my little point and shoot camera. I even recorded a score for it on guitar! We called it “Blue Notes” and we made a whole package out of an old Cuatro painted blue with a holder for the DVD and submission materials. I’m actually not sure what became of it as we never heard anything about the results. It was a hell of a learning experience. I remember being so intimidated by iMovie and I really didn’t have a clue what I was doing. Eventually, I figured out how to export the edit for better or for worse. My favourite part of that experience was probably the cinematography although it was probably more sin than cinema!

FILMCO: Throughout high school, you spent most of your time painting, sculpting and cooking. Which of these disciplines do you enjoy the most and why?
IR: Cooking, because who doesn’t love eating! Seriously though I would spend countless hours in the Art Room at school just painting away, musing on the thoughts in my head. It’s hard to choose a medium because I’d hate to be pinned down to one form of expression. That said, I think sculpture in wood or clay can be really rewarding. There’s just something so ancient and tactile about it that really speaks to me.

FILMCO: You’re a director, editor, director of photography and multimedia designer. What exactly does a multimedia designer do?
IR: It kinda sounds like a ‘Jack of all trades’ when you list it out like that, but nowadays you have to be able to adapt to get paid! A Multimedia Designer does all the things, combining imagery, graphics, animation and sound to make a complete final package without having to go through multiple departments as one might in a traditional production environment so it’s like an animator on steroids. So you kinda have to bridge a lot of gaps and use that wider skillset to make mundane things more interesting. It’s good for quick turnarounds especially on smaller projects. It’s the way a lot of digital agencies handle their content creation now, something to do with shrinking budgets or the other.

FILMCO: Which one of these disciplines is the most challenging and why?
IR: Being a Multimedia Designer in advertising can be pretty soul-draining depending on your circumstances. It’s a lot of pressure to be under. It makes getting to focus on one specific role like directing or editing feel like a nice vacation. That said I feel like Directing is up there too in terms of difficulty especially when everyone is looking to you for answers and you may not always have them so you always need to keep your mind open to solutions, wherever they come from.

FILMCO: Is there a particular genre of filmmaking you prefer? If so, why?
IR: I wouldn’t say I have a particular genre preference; once the story is good and well-executed, I’ll have a good time! That said, I love Science Fiction and Fantasy. If I wasn’t making films for a living I’d probably be doing something Physics related. I feel like Science Fiction is this wide-open playing field that lets you explore all the facets of the human condition; love, war, existence and so much more really. I’m also an animation junkie; I like cartoons!

FILMCO: Can you tell us about your inspiration for “Lady in the River”, a film you entered into ttff/19?
IR: I remember watching an interview with Robert Rodriguez where he talked about using what you have around you to make your film. So my co-director Soraya and I wrote a story that would fit those constraints; a house with a nearby river and a couple of friends who could act. The ideas were really wild in the beginning but we settled on a good ol’ PTSD meets haunting story. In hindsight, part of the inspiration seemed to be to prove to ourselves that we could make a coherent film. It took a while to edit and finish because I wrote on a device that needed VFX in quite a few scenes and I had to learn while doing (as with most challenges I set for myself!). After dealing with a lot of self-doubt about the short I decided that the only way forward was to submit it and get it out so that we could move forward from it. And so, I was surprised when it got into the Festival. That was a great experience though and it re-invigorated me to keep making more films.

FILMCO: You also have a lot of experience working on commercials. What’s the most important thing you’ve ever learned working on a film or commercial set?
IR: I have worked on a lot, large and small scale, in quite a few capacities too. Hands down the two most important things are to back up your footage and feed your cast and crew! And casting aside your ego for a better idea from one of your set mates is always cool too.

FILMCO: How would you compare working on a film to working on a commercial?
IR: Commercials are sometimes way more high stress and fast-paced. On a film, you have the chance to think about the shot or the actor’s performance. Although set days can be gruelling too. I think overall it’s decidedly more fulfilling to craft a story to be immortalized on film than to just aim to hit social media metrics with whatever is in vogue.

FILMCO: What is your favourite local film and why?
IR: That’s an ever-changing item for me but at the top of the list for me right now would be “I Don’t Call It Ghetto” by Miquel Galofre. It’s a sweet and sincere portrait that is able to paint an honest picture while preserving the dignity of its subjects. Honourable mention to “Please See Attached” by Andrei Pierre for superb dialogue, direction and rhythm.

FILMCO: If all necessities were available and you could choose any project to work on next, what would it be?
IR: I would get several acres of land and build a soundstage and studio backlot! I would love to develop a sci-fi series with plenty of local flavour and plenty of VFX shots to keep my animation friends busy, like “Westwood Park” but in space or something! Haha!

FILMCO: You seem to be kept busy writing scripts, treatments and shooting music videos. What do you have lined up to work on, next?
IR: I have so many story ideas waiting to jump off the page and onto the screen! I’m currently in pre-production on an animated short that should be ready by 2022/23. It’s a personal project so I’m taking my time with it! Also, I shot and edited a crime comedy called “Cheesecake” [this year] and it’s written and directed by my good friend Jabari Daniel.